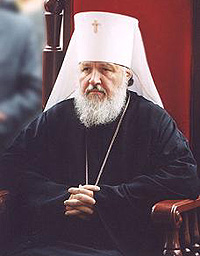 Metropolitan Kyrill, foreign minister of the Russian Orthodox Church, discusses Christian values in the post-communist era, his relationship with the pope in Rome, Vladimir Putin the churchgoer — and wrangles with SPIEGEL about homosexuality.

+Kyrill: “The Bible calls it a sin. But we do not condemn these people. The church is opposed to these people being persecuted or offended. But why should sin be propagated? The gay parade is a blatant display of sodomy. In that case, we might as well promote other sins, as has long been the case on television. This degenerates public morality.”

Excerpts from the interview posted on Spiegel Online International.

SPIEGEL: You are referring to the liberal West. What troubles you, for example, about homosexuals marching through the streets of Moscow in a parade, just as they do in Berlin or Amsterdam?

Kyrill: It distorts the boundary between good and evil, between sin and sanctity. Even adultery is apparently no longer considered a sin, despite the fact that every adulterer senses that he has done something wrong. But human beings have a conscience. That’s something even the Marxists were unable to eliminate. They had an explanation for everything, a self-contained philosophy in which being determined consciousness — just as your philosophers in Germany say, the conscience is the result of cultural development. But whether you are in Papua New Guinea, Munich or Novosibirsk in Siberia, the principles are the same everywhere: Thou shall not steal, though shall not kill…

SPIEGEL: … but not everyone says: Thou shall not be gay. Why should people have to conceal their homosexuality?

Kyrill: The Bible calls it a sin. But we do not condemn these people. The church is opposed to these people being persecuted or offended. But why should sin be propagated? The gay parade is a blatant display of sodomy. In that case, we might as well promote other sins, as has long been the case on television. This degenerates public morality. It is the church’s job to call a sin a sin. Otherwise it no longer serves a purpose. Unfortunately, the tendency in today’s world is to champion the freedom of choice, while freedom from evil is virtually forgotten.

SPIEGEL: It’s human for a person to be homosexual. How can something that is human be a sin?

Kyrill: And what, in your opinion, is adultery — something good or something bad?

SPIEGEL: This decision lies within the conscience of every individual.

Kyrill: We aren’t talking about just any decision. We are talking about morals. They want us to believe that morality is relative. But that’s completely untrue. The communists said that good is what is good for the working class. That was relative morality — and 60 million people were exterminated. Hitler claimed that what is good is what is good for greater Germany. That too cost millions of lives. Morality is either absolute or it doesn’t exist at all. If you can justify homosexuality, why not pedophilia?

SPIEGEL: But that’s an enormous difference! Sexuality relates to adults who can decide for themselves. Pedophilia involves children being abused and has nothing to do with human freedom.

Kyrill: In a few years, they’ll tell you that 12-year-old girls used to be children, but that they are now much further developed. Twenty years ago, no one would have dreamed that Germany would pass a law one day that recognizes homosexual marriages. But now that too has been accepted. We are talking about preserving the principle. There is something we call a general moral nature.

SPIEGEL: And it depends on time and region. There are ethnic groups that allow polygamy, for instance.

Kyrill: Dostoyevsky wrote that God and the devil are fighting for control in the heart of man. Nowadays many pursue the logic that everything they want ought to be good and justified. We are too quick to treat emotions that ultimately harm us as natural needs. When moral foundations are shaken, we unleash our instincts. But released instincts belong in the animal world. What I am saying is something that the liberal SPIEGEL will never print: You undoubtedly think that this Metropolitan Kyrill is out of his mind and that what he is saying is complete nonsense.

SPIEGEL: We like to argue. But you can’t possibly characterize homosexuality as an animal instinct?

Kyrill: Instinct is not a term with negative connotations. Take hunger, thirst, the sex drive, for example. If God had not given us these instincts, man would not exist. The difference between men and animals is that men can control their drives.

4 thoughts on “The Bible Calls it a Sin”