Evidence of more problems with the universal “macro-evolutionary” theory. It seems beetles are also exempt from evolution. They join the mighty cockroach, horseshoe crab, and many other species who stopped progressing millions of years ago.

Wait, don’t squash that beetle! Its lineage predates dinosaurs. New research hints that modern-day versions of the insects are far older than any tyrannosaur that trod the Earth.

Today’s plethora of beetle species were thought to have blossomed 140 million years ago, during the rise of flowering plants. But the new study of beetle DNA and fossils, published in the Dec. 21 issue of the journal Science, pushes their appearance back to 300 million years ago.

That beats the arrival of dinosaurs by about 70 million years.

“Unlike the dinosaurs which dwindled to extinction, beetles survived because of their ecological diversity and adaptability,” said the study’s lead scientist Alfried Vogler, an entomologist at Imperial College London and the Natural History Museum in London.

Today, 350,000 species of beetles dot collections around the world, and millions more are estimated to exist but haven’t been discovered — which means they make up more than one-fourth of all known species of life forms. The reason for this tremendous diversity has been debated by scientists for many years but never resolved.

Vogler thinks beetles’ head start on our planet with its ever-changing environments was the secret to their success.
“The large number of beetle species existing today could very well be a direct result of this early evolution,” Vogler said, “and the fact that there has been a very high rate of survival and continuous diversification of many lineages since then.”

To reach this conclusion, Vogler and his team teased out evolutionary data from the DNA of 1,880 modern beetle species, then compared it to fossil records dating back 265 million years to build detailed evolutionary trees. The new genetic maps suggest that a common ancestor to beetles crept up well before its descendants showed up in the fossil record.

“With beetles forming such a large proportion of all known species, learning about their relationships and evolution gives us important new insights into the origin of biodiversity and how beetles have triumphed over the course of nearly 300 million years,” Vogler said. 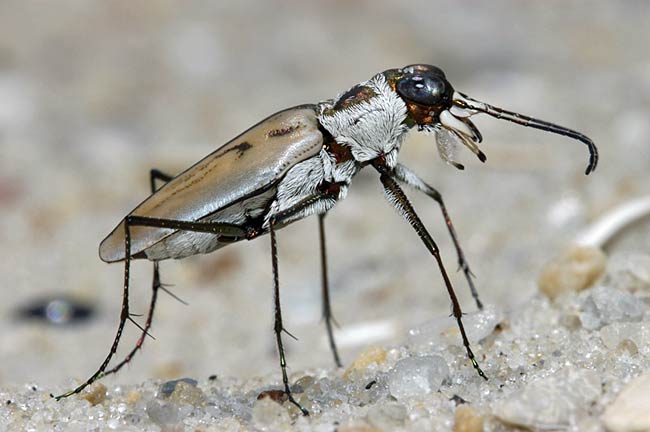 An endangered tiger beetle from North America’s east coast. Scientists believe it and most modern beetles appeared about 300 million years ago. Credit: © Science