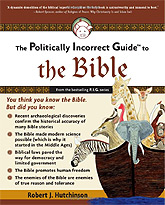 For centuries, atheism has been the rake lurking around the edges of the Christmas party, but now it’s slurping from the punch bowl in the middle of the room. […]

The Politically Incorrect Guide to the Bible is chockfull of such corrective history and should prove an invaluable tool, especially for students confronted daily by balderdash of all kinds. […]

Christopher Hitchens, Richard Dawkins and Sam Harris are selling atheist manifestos by the bin, and teens are soaking up blasphemous bits on Comedy Central and HBO. The movie version of Philip Pullman’s The Golden Compass is peddling a villainous Catholic Church to kids. And the Christmas concert at public schools has long since morphed into the Winter concert.

In terms of cultural clout, it’s a good time to be an atheist in America.

The Politically Incorrect Guide to the Bible by Robert Hutchinson fires back at this icy trend with history, statistics, logic, humor and even a few rabbit punches. If counter-terrorist Jack Bauer were to take up Christian apologetics, he might have penned something like this.

Hutchinson begins by sketching out the mindset of the new atheism.

“For secular fundamentalists, religion in general, and the Bible in particular, are not just wrongheaded but actually dangerous,” Hutchinson writes. “That’s because religion and the Bible stand in the way of everything they value most in life — primarily unlimited sex, of course, but also the power to reshape society into a kind of secular utopia free from traditional ethical restraint.”

Hutchinson’s book is not only a compact, well-argued defense of the Bible but also of Christianity and Western civilization. He doesn’t tie up all the loose ends but comes awfully close. Hutchinson dispatches numerous alleged Biblical errors or contradictions, examines recent archeological finds, demonstrates why science developed as a direct result of Christianity and exposes faulty logic, most notably by sexual libertines. One quibble: He gives a tad too much respect to authors such as the late John Boswell, whose error-riddled book on alleged church blessings of same-sex unions, Christianity, Social Tolerance and Homosexuality, is characterized as a “classic.”

Hutchinson traces how Christianity uniquely lifted women’s status but decides not to include a critique of the trendy New Age “herstory” of goddess-based religions.

Some of the strongest chapters are devoted to rebutting the assertion that human rights are a product of secularism rather than God-given and guaranteed by the advance of Judaism and Christianity. Citing Freedom House reports, he notes that where Christianity has taken root or had cultural influence (as in Iceland and Costa Rica) individual freedom has advanced. Where it has not, human rights are virtually non-existent (Saudi Arabia or China). Russia, which is still rated “not free,” is only 15% Christian.

how about Joseph Stalin’s famous remark that, “a single death is a tragedy, a million deaths is a statistic,” contrasted with “Are not two sparrows sold for a farthing? And one of them shall not fall on the ground without your Father. But the very hairs of your head are all numbered. Fear ye not therefore, ye are of more value than many sparrows” (Matthew 10:29-31).

For believers, this is great fun. For atheists, it’s probably more like getting a filling without Novocain.

Hutchinson makes the case that the history of Christian Europe is the history of freedom’s rising, informed by the Bible’s insistence on human dignity. Despite atheists’ charge that the Bible endorses slavery, both Old and New Testaments are full of sound reasons to oppose it. The Bible acknowledges the fallen nature of man and tempers the worst without endorsing the practices.

“The truth is that the savage cruelty of slavery has existed on a massive scale all over the world for most of human history — and still exists today in parts of the Islamic world and Asia — and yet it was first officially banned, by force of law, only in Christian Europe,” Hutchinson writes. “No culture on earth questioned the morality of slavery until Christians did the questioning.”