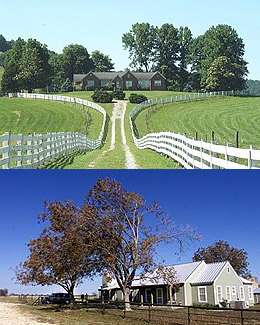 See if you can identify the specific owner of each of the houses described in this story. Then ask yourself, which owner really cares about the environment and who is a big hypocrite?

House #1 – A 20 room mansion (not including 8 bathrooms) heated by natural gas. Add on a pool, and a pool house, and a separate guest house, all heated by gas. In one month this residence consumes more energy than the average American household does in a year. The average bill for electricity and natural gas runs over $2,400 per month. In natural gas alone, this property consumes more than 20 times the national average for an American home.

House #2 – A 4,000 sq.ft. home designed by an architecture professor at a leading national university. This house incorporates every “green” feature current home construction can provide. A central closet in the house holds geothermal heat-pumps drawing ground water through pipes sunk 300 feet into the ground. The water (usually 67 degrees F) heats the house in the winter and cools it in the summer. The system uses no fossil fuels such as oil or natural gas and it consumes one-quarter electricity required for a conventional heating/cooling system.

. . . View the Homes and find out Who the Owners are

15 thoughts on “A Tale of Two Houses”