I had a chance to hear her speak a couple years ago. I’m not easily moved by a speaker, but she is a compelling speaker. Her story is incredible and it’s hard to imagine anyone after hearing her speak continue to believe that abortion is only a choice over a “mass of tissue”.

Gianna Jessen was aborted at 7½ months. She survived. Astonishingly, she has forgiven her mother for trying to kill her.
By Elizabeth Day

Gianna Jessen grew up believing that she was born with cerebral palsy because she had been delivered prematurely in a particularly traumatic birth.

That was the story told to her by her adoptive mother and it was not until she was 12 years old that she discovered the truth about what made her different from the other children at school. 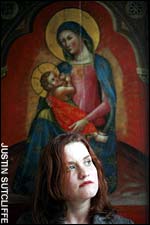 “I had an innate wondering,” Miss Jessen says. “I wasn’t satisfied for some reason, so I kept asking why I had this disability.

“She tried to break it to me gently and then, just as she was about to tell me, I said ‘I was aborted, right?’ She said ‘Yeah, you were.’ And my reaction was ‘Well, at least I have cerebral palsy for an interesting reason.’ ”

That was 16 years ago. Miss Jessen is now a pretty, fresh-faced 28-year-old with wavy shoulder-length red hair. She speaks with eloquence and composure, in a soft southern American accent, her forehead crinkling slightly as she talks.

But while her outward appearance might have changed, her inner determination to overcome even the most insurmountable challenges has remained absolutely constant.

From the very beginning, Miss Jessen survived in spite of herself. Her mother, Tina, a 17-year-old single woman, decided to have an abortion by saline injection when she was seven-and-a-half months pregnant (there is no legal time limit for abortion in America).

But in the early morning of April 6, 1977, the abortion failed. Against the odds, the baby had lived. A nurse called the emergency services and the child was taken to hospital. She weighed only 2lb and the abortionist had to sign her birth certificate.