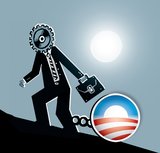 The White House hyped the news Friday that January payrolls had risen by 243,000. The hitch is the Bureau of Labor Statistics (BLS) also dropped 1.2 million from the calculated workforce. Somehow this net loss of a million workers in a single month was transformed into an improvement in the unemployment rate. As the old saying goes, figures don’t lie, but liars can figure.

“Job growth was widespread,” the BLS reported, but most Americans sense that something isn’t quite right with the numbers. The most important change was the deep decline in the workforce. While the overall population jumped an 1.6 million in January, the workforce declined a record-setting 1.2 million. This figure represents those who out of sheer frustration or for other reasons have dropped out of what the government defines as the active labor pool. They are worse than simply unemployed; they are both jobless and hopeless.

The good news for Obama administration statisticians is that these unfortunates don’t factor into the official unemployment rate, which only counts those thought to be looking for work. So while five people drop out of the system in despair for every new job created, the official unemployment rate declines and the White House enjoys a good news day.

“The recovery is speeding up,” President Obama declared. However, the broader measures tell a different story. The employment-to-population ratio, the most comprehensive jobs number, remained flatlined at 58.5 percent, around where is has been for at least a year. The number lacking jobs has likewise remained steady at 41.5 percent. The overall participation rate, the percentage making up the workforce in the population, accelerated an already steep decline to a 30-year low of 63.7 percent. In short, the recovery is not speeding up – people are simply giving up.

The participation rate is a subjective measure and highly subject to manipulation. The lower it goes and the more people are dropped from the unemployment equation, the better the numbers will look for the White House. This figure has been dropping sharply since Mr. Obama took office. Last month, an analysis at the Zero Hedge financial website noted that by extending the logic of reporting progressively fewer labor-force participants, “America will officially have no unemployed when the Labor Force Participation rate hits 58.5 percent, which should be just before the presidential election.” Maybe that’s the plan.

A year ago, there were 99 million people either officially unemployed or otherwise not working, and the official unemployment rate was 9.1 percent. Now, unemployment reported by the government is down to 8.3 percent, but the number without jobs has topped 100 million. The disconnect between increasing joblessness in America and the rosy White House official statistics should be the subject of a congressional investigation. Something does not add up.