Skip to content
12/17/2010 – Chuck Colson –
Finally, a major news outlet reports on the persecution of Iraqi Christians. But I have to wonder if the Administration is reading the headlines.

On Monday the New York Times ran a lead paragraph to a story that’s as chilling as any I’ve read in recent memory. Here it is:

“A new wave of Iraqi Christians has fled to northern Iraq and abroad amid a campaign of violence against them and growing fear that the country’s security forces are unable or, more ominously, unwilling to protect them.”

There, in one paragraph, the Times sums up the grim situation facing Christians in Baghdad and throughout Iraq. They are subject to a campaign of violence—not some indiscriminate acts by a few Islamist radicals. They are being harassed and killed right under the very noses of the Iraqi security forces and the government, and it is not clear at all that the government wants to stop it. [Read more…]

It has been said that there are none so blind as those who will not see. The quote is attributed by some to Jesus (Matthew 13:13): “Therefore I speak to them in parables: because they seeing see not; and hearing they hear not, neither do they understand”

That’s a perfect description of Rep. Nancy Pelosi and Sen. Harry Reid, both of whom disingenuously state that that there has been no sign of progress in Iraq and that we are losing the war there and must pull up stakes and run as fast as we can with our tails between our legs. 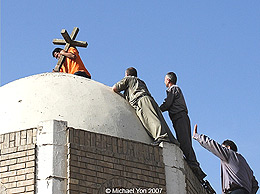 I photographed men and women, both Christians and Muslims, placing a cross atop the St. John’s Church in Baghdad. They had taken the cross from storage and a man washed it before carrying it up to the dome. A Muslim man had invited the American soldiers from ‘Chosen’ Company 2-12 Cavalry to the church, where I videotaped as Muslims and Christians worked and rejoiced at the reopening of St John’s, an occasion all viewed as a sign of hope.

There is another tragedy taking in place in Iraq on a daily basis, far from the front pages and the TV news. It does not involve the kidnapping of U.S. troops, nor even the fire-bombing of Muslim shrines by other Muslims, both of which by now are familiar to most Americans.

This is a tragedy taking place in a total media vacuum. Even our government has remained silent as it continues.

Perhaps it’s because the victims are Christians. Indeed, members of the most ancient Christian communities in the world.

Over the past three years, Iraqi Muslim extremists have targeted Christians in systematic attacks, aimed at driving them from their homes, their work places, and their churches.

Just last week, a group of armed Muslims set fire to St. George’s Assyrian Church in the Dora neighborhood of Baghdad, completely decimating what remained of a church already hit by a deadly fire-bombing in October 2004.

Embedded journalists in Iraq are having their minds changed left and right by U.S. soldiers.

Operation Iraqi Freedom saw the advent of a practice that revolutionized modern war reporting: the embedding of journalists with frontline combat units in war. This practice gave the media, the American public and the world unprecedented access to the soldiers on the front lines, as well as to the war itself, through the filing of stories, photographs and video from the battlefront in real time, by reporters who were right there with the soldiers doing the fighting. “We were offered an irresistible opportunity: free transportation to the front line of the war, dramatic pictures, dramatic sounds, great quotes,” said Tom Gjelten of National Public Radio. “Who can pass that up?”

For Americans over, say, fifty, the image of desperate Vietnamese surrounding the American embassy during the fall of Saigon is one we will not soon forget. Watching American helicopters fly away leaving people, many of whom had helped us, to their fates in Vietnam made me feel ashamed—a sense of shame that only grew when we learned what happened to many of those people. These memories are why I find some recent stories coming out of Iraq troubling. As I have told “BreakPoint” listeners and readers, I believe that we should not leave Iraq until we have first established a measure of stability and restored order. To do otherwise would be bad for American security and even worse, of course, for the Iraqi people.

The verdict on four years of fighting in Iraq hinges on the events of the next few months.

The courtroom he dominated for 15 months seemed much smaller on Monday without him there to mock the judges and assert his menacing place in history.

But the thick, high-register voice of Saddam Hussein was unmistakable. In audio recordings made years ago and played 10 days after his hanging, Mr. Hussein was heard justifying the use of chemical weapons against the Iraqi Kurds in the late 1980s, predicting they would kill “thousands” and saying he alone among Iraq’s leaders had the authority to order chemical attacks.

In the history of prosecutions against some of the last century’s grimmest men, there can rarely have been a moment that so starkly caught a despot’s unpitying nature.

On one recording, Mr. Hussein presses the merits of chemical weapons on Izzat Ibrahim al-Douri, his vice-president, and now, the Americans believe, the fugitive leader of the Sunni insurgency that has tied down thousands of American troops. Mr. Douri, a notorious hard-liner, asks whether chemical attacks will be effective against civilian populations, and suggests that they might stir an international outcry.

“You mean they will kill thousands?” Mr. Douri asks.

“Yes, they will kill thousands,” Mr. Hussein says.
Read the rest of this entry>>

James Carroll, recently writing in the Boston Globe, wondered if America could finally accept defeat in Iraq, and be the better for it, comparing it to Vietnam:

Mosul (AsiaNews) – Fr Paulos Eskandar was laid to rest in Mosul today. The decapitated body of the Syrian-Orthodox priest was found in an eastern district of this Iraqi city yesterday. He was abducted last Monday by an unknown Islamic group which posted a hefty ransom of 0-350,000, the Assyrian International News Agency (AINA) reported. The group also demanded that signs be posted on his church apologising for the Pope’s Regensburg remarks as a pre-condition for negotiations.

Johannesburg (AND) In yet another furore to grip the Christian community, the head of the Orthodox Church of Greece has joined the Pope controversy by attacking what he calls Islamic fanaticism in Africa.

“Not everything is fit to print. There is to be regard for at least probable factual accuracy, for danger to innocent lives, for human decencies, and even, if cautiously, for nonpartisan considerations of the national interest.”

YORK, Pa.–Three days before terrorist Abu Musab al-Zarqawi was killed by a U.S. air strike in Iraq, Pastor Moussa Joseph Moussa led a group of 500 believers in praying for the insurgency to be defeated. After the bombing, Mr. Moussa says, “I really believe that because we prayed, God dealt with the evil forces.”

For chaplains in Iraq, the constant battle is the fear, loneliness and tedium that can test a soldier’s faith Text and photographs

Just before sunrise on a foggy road outside Mosul, Iraq, a convoy of supply trucks lumbers from one forward operating base to another. On this December morning, the convoy is escorted by a dozen armored U.S. Army vehicles, including a Humvee with a three-man crew — artillerymen farmed out to the 142nd Combat Support Battalion and retrained for convoy security. This is some of the most dangerous duty a soldier can pull in Iraq because insurgents target convoys with their weapon of choice: improvised explosive devices, or IEDs. Among service members, IEDs are the single greatest cause of death. Blast wounds account for 90 percent of the injuries at Walter Reed Army Medical Center.