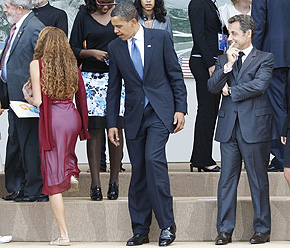 Obama shows the world what a “gentleman” and “statesman” he really is, at the G-8 Summit in L’Aquila, Italy, July 9, 2009. I wonder what Obama’s wife will do when she sees this picture?

Leaders of the Group of Eight major industrial nations and the main developing economies are meeting in the central Italian city of L’Aquila until Friday to discuss issues ranging from global economic stimulus to climate change and oil prices. – REUTERS/Jason
[Read more…]

Initially feared and prohibitively favored, the campaign of Hillary Clinton in its death spiral has devolved into Pink Panther-like absurdity. Originally described as a juggernaut, the terms that most accurately describe Hillary’s campaign now are bumbling and incoherent. [Read more…]

LONDON (Reuters) – One of Britain’s most prestigious art galleries put a block of slate on display, topped by a small piece of wood, in the mistaken belief it was a work of art.