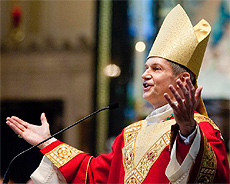 by Terence P. Jeffrey –
Bishop Thomas John Paprocki, leader of the Roman Catholic Diocese of Springfield, Ill., says the U.S. Supreme Court is giving “legal protection to intrinsic evil” in its decisions late last month that advanced the cause of legalized same-sex “marriage” in the United States.

“As in the case of Roe v. Wade striking down abortion laws forty years ago, the United States Supreme Court has again usurped its legitimate prerogative through a raw exercise of judicial power by giving legal protection to an intrinsic evil, this time by striking down the Defense of Marriage Act in the case of U.S. v. Windsor and in refusing to take up the defense of Proposition 8 in California in the case of Hollingsworth v. Perry.

“These hollow decisions are absolutely devoid of moral authority,” said the bishop. “It is becoming increasingly and abundantly clear that what secular law now calls “marriage” has no semblance to the sacred institution of Holy Matrimony. People of faith are called to reject the redefinition of marriage and bear witness to the truth of Holy Matrimony as a lasting, loving and life-giving union between one man and one woman.”

In the Defense of Marriage case, the Supreme Court argued that the “due process” clause of the Fifth Amendment prohibited the U.S. Congress from defining the word “marriage” insofar as it appears in federal law as meaning the legal union of one man and one woman. If even just one state legalizes same-sex marriage, the court said, then the federal government must do so also so that it gives “equal” treatment to “same-sex marriages” from that state and male-female marriages from there or anywhere else.

In the Proposition 8 case, the Supreme Court ruled that the proponents of the marriage amendment that California voters approved for their state constitution did not have “standing” to defend that amendment against challenges in federal court. The court said only state government officials, such as the attorney general and governor of the state, could do that.

However, officials in California’s state government refused to defend in court their state constitution’s voter-approved declaration that marriage is between a man and a woman because they disagreed with the majority of the state’s voters and supported the idea that two men or two women can “marry” one another.