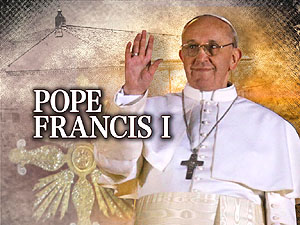 by Peggy Noonan –
I’ll tell you how it looks: like one big unexpected gift for the church and the world.

Everything about Cardinal Jorge Mario Bergoglio’s election was a surprise—his age, the name he took, his mien as he was presented to the world. He was plainly dressed, a simple white cassock, no regalia, no finery. He stood there on the balcony like a straight soft pillar and looked out at the crowd. There were no grand gestures, not even, at first, a smile. He looked tentative, even overwhelmed. I thought, as I watched, “My God—he’s shy.”

Then the telling moment about the prayer. Before he gave a blessing he asked for a blessing: He asked the crowd to pray for him. He bent his head down and the raucous, cheering square suddenly became silent, as everyone prayed. I thought, “My God—he’s humble.” I wasn’t sure what to make of it and said so to a friend, a member of another faith who wants the best for the church because to him that’s like wanting the best for the world. He was already loving what he was seeing. He asked what was giving me pause. I said I don’t know, the curia is full of tough fellows, the pope has to be strong.

“That is more than strength,” he said of the man on the screen. “This is not cynical humanity. This is showing there is another way to be.”

Yes. This is a kind of public leadership we are no longer used to—unassuming, self-effacing. Leaders of the world now are garish and brazen. You can think of half a dozen of their names in less than a minute. They’re good at showbiz, they find the light and flash the smile.

But this man wasn’t trying to act like anything else. “He looks like he didn’t want to be pope,” my friend said. That’s exactly what he looked like. He looked like Alec Guinness in the role of a quiet, humble man who late in life becomes pope. I mentioned that to another friend who said, “That would be the story of a hero.”

And so, as they’re saying in Europe, Francis the Humble. May he be a living antidote.

***
He is orthodox, traditional, his understanding of the faith in line with the teaching of John Paul II and Benedict XVI. He believes in, stands for, speaks for the culture of life.

He loves the poor and not in an abstract way. He gave the cardinal’s palace in Buenos Aires to a missionary order with no money. He lives in an apartment, cooks his own food, rides the bus. He rejects pomposity. He does not feel superior. He is a fellow soul. He had booked a flight back to Argentina when the conclave ended.

But these two traits—his embrace of the church’s doctrines and his characterological tenderness toward the poor—are very powerful together, and can create a powerful fusion. He could bridge the gap or close some of the distance between social justice Catholics and traditional, doctrinal Catholics. That would be a relief.

And he has suffered. Somehow you knew this as you looked at him Wednesday night. Much on this subject will come out.

The meaning of the name he chose should not be underestimated. Cardinal Bergoglio is a Jesuit and the Jesuits were founded by St. Ignatius Loyola, who said he wanted to be like St. Francis of Assisi.

Go and repair my house, which you see is falling into ruin.

One of the most famous moments in St. Francis’s life is the day he was passing by the church of St. Damiano. It was old and near collapse. From St. Bonaventure’s “Life of Francis of Assisi”: “Inspired by the Spirit, he went inside to pray. Kneeling before an image of the Crucified, he was filled with great fervor and consolation. . . . While his tear-filled eyes were gazing at the Lord’s cross, he heard with his bodily ears a voice coming from the cross, telling him three times: ‘Francis, go and repair my house which, as you see, is falling into ruin.’ ” Francis was amazed “at the sound of this astonishing voice, since he was alone in the church.” He set himself to obeying the command.

Go and repair my house, which is falling into ruin. Could the new pope’s intentions be any clearer? The Catholic Church in 2013 is falling into ruin. It has been damaged by scandal and the scandals arose from arrogance, conceit, clubbiness and an assumption that the special can act in particular ways, that they may make mistakes but it’s understandable, and if it causes problems the church will take care of it.

Pope Francis already seems, in small ways rich in symbolism, to be moving the Vatican away from arrogance. His actions in just his first 24 hours are suggestive.

He picks up his own luggage, pays his own hotel bill, shuns security, refuses a limousine, gets on a minibus with the cardinals. That doesn’t sound like a prince, or a pope. He goes to visit a church in a modest car in rush-hour traffic. He pointedly refuses to sit on a throne after his election, it is reported, and meets his fellow cardinals standing, on equal footing. The night he was elected, according to New York’s Cardinal Timothy Dolan, Vatican officials and staffers came forward to meet the new pope. He politely put them off: Not now, the people are waiting. Then he went to the balcony.

***
After the conclave, I’m grateful for two other things. First, after all the strains and scandals they still came running. A pope was being picked. The smoke came out and the crowd was there in St Peter’s Square. They stood in the darkness, cold and damp, and they waited and cheered and the square filled up. As the cameras panned the crowd there was joy on their faces, and the joy felt like renewal.

People come for many reasons. To show love and loyalty, to be part of something, to see history. But maybe we don’t fully know why they run, or why we turn when the first reports come of white smoke, and put on the TV or the computer. Maybe it comes down to this: “We want God.” Which is what millions of people shouted when John Paul II first went home to Poland. This is something in the human heart, and no strains or scandals will prevail against it.

I viewed it all initially with hope, doubt and detachment. And then the white smoke, and the bells, and the people came running, and once again as many times before my eyes filled with tears, and my throat tightened. That in the end is how so many Catholics, whatever their level of engagement with the church, feel. “I was more loyal than I meant to be.”

Much will unfold now, much will be seen. An ardent, loving 75-year-old cardinal in the middle of an acute church crisis is not going to sit around and do nothing. He’s going to move. “Go and repair my house, which you see is falling into ruin.”