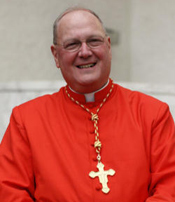 by Deacon Keith Fournier –
“If the government can, for example, tell Catholics that they cannot be in the insurance business today without violating their religious convictions, where does it end? This violates the constitutional limits on our government, and the basic rights upon which our country was founded. Much remains to be done. We cannot rest when faced with so grave a threat to the religious liberty for which our parents and grandparents fought. In this moment in history we must work diligently to preserve religious liberty and to remove all threats to the practice of our faith in the public square.” (Cardinal Timothy Dolan)

NEW YORK, NY (Catholic Online) – Timothy Cardinal Dolan, the Archbishop of New York, recently returned from Rome, is continuing to provide clear and courageous leadership to the Catholic Church in the United States. We are facing one of the greatest struggles in our history.

We offer below the full text of a letter which was sent on Ash Wednesday, from Cardinal Dolan, to his brother Bishops. It is co-signed by another heroic figure in this critical hour, Bishop William Lori, the Chairman of the Bishops Committee for Religious Liberty.

We ask our readers around the globe to read the letter, distribute it widely, pray for Cardinal Dolan, Bishop Lori and all of our Bishops. We then urge you to take action against this unconstitutional and unjust mandate which threatens the first freedom, religious freedom. (Deacon Keith Fournier, Editor in Chief)

Since we last wrote to you concerning the critical efforts we are undertaking together to protect religious freedom in our beloved country, many of you have requested that we write once more to update you on the situation and to again request the assistance of all the faithful in this important work. We are happy to do so now.

First, we wish to express our heartfelt appreciation to you, and to all our sisters and brothers in Christ, for the remarkable witness of our unity in faith and strength of conviction during this past month. We have made our voices heard, and we will not cease from doing so until religious freedom is restored.

As we know, on January 20, the Department of Health and Human Services announced a decision to issue final regulations that would force practically all employers, including many religious institutions, to pay for abortion inducing drugs, sterilizations, and contraception. The regulations would provide no protections for our great institutions-such as Catholic charities, hospitals, and universities-or for the individual faithful in the marketplace. The regulations struck at the heart of our fundamental right to religious liberty, which affects our ability to serve those outside our faith community.

Since January 20, the reaction was immediate and sustained. We came together, joined by people of every creed and political persuasion, to make one thing resoundingly clear: we stand united against any attempt to deny or weaken the right to religious liberty upon which our country was founded.
On Friday, February 10, the Administration issued the final rules. By their very terms, the rules were reaffirmed “without change.” The mandate to provide the illicit services remains. The exceedingly narrow exemption for churches remains. Despite the outcry, all the threats to religious liberty posed by the initial rules remain.

Religious freedom is a fundamental right of all. This right does not depend on any government’s decision to grant it: it is God-given, and just societies recognize and respect its free exercise. The free exercise of religion extends well beyond the freedom of worship. It also forbids government from forcing people or groups to violate their most deeply held religious convictions, and from interfering in the internal affairs of religious organizations.

Recent actions by the Administration have attempted to reduce this free exercise to a “privilege” arbitrarily granted by the government as a mere exemption from an all-encompassing, extreme form of secularism. The exemption is too narrowly defined, because it does not exempt most non-profit religious employers, the religiously affiliated insurer, the self-insured employer, the for-profit religious employer, or other private businesses owned and operated by people who rightly object to paying for abortion inducing drugs, sterilization, and contraception. And because it is instituted only by executive whim, even this unduly narrow exemption can be taken away easily.

In the United States, religious liberty does not depend on the benevolence of who is regulating us. It is our “first freedom” and respect for it must be broad and inclusive-not narrow and exclusive. Catholics and other people of faith and good will are not second class citizens. And it is not for the government to decide which of our ministries is “religious enough” to warrant religious freedom protection.

This is not just about contraception, abortion-causing drugs, and sterilization-although all should recognize the injustices involved in making them part of a universal mandated health care program. It is not about Republicans or Democrats, conservatives or liberals. It is about people of faith. This is first and foremost a matter of religious liberty for all. If the government can, for example, tell Catholics that they cannot be in the insurance business today without violating their religious convictions, where does it end? This violates the constitutional limits on our government, and the basic rights upon which our country was founded.

Much remains to be done. We cannot rest when faced with so grave a threat to the religious liberty for which our parents and grandparents fought. In this moment in history we must work diligently to preserve religious liberty and to remove all threats to the practice of our faith in the public square. This is our heritage as Americans. President Obama should rescind the mandate, or at the very least, provide full and effective measures to protect religious liberty and conscience.

Above all, dear brothers, we rely on the help of the Lord in this important struggle. We all need to act now by contacting our legislators in support of the Respect for Rights of Conscience Act, which can be done through our action alert

We invite you to share the contents of this letter with the faithful of your diocese in whatever form, or by whatever means, you consider most suitable. Let us continue to pray for a quick and complete resolution to this and all threats to religious liberty and the exercise of our faith in our great country.