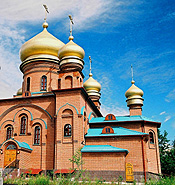 As we are entering this holiday season at this time of turmoil and uncertainty, scores of spiritual seekers will visit Christian places of worship in search of hope, solace, and love.

Most of them are bound to encounter the same problem Robin did last year: How does one know which church to choose given the great variety that exists among them? There are churches, for instance, where priests in swishing white robes lead tightly structured services that revolve around prescribed rituals. On the other hand, there are churches where meetings are informal, free-flowing, and emotionally supercharged. And then there are churches where jeans-clad pastors read from and expound on the Bible for hours on end.

So how does one know which church to pick? How is a seeker to determine which ones reflect the truth of the Christian faith?

To make sense of this varied fare, an analogy may help. Think of a church as the last camp mountain climbers set up on the side of a mountain before their final push for the summit. Such a camp is obviously a place of great import, for it is there where mountaineers regroup and prepare for the last leg of their ascent. A good camp will provide nourishment, equipment, and other necessities in order to make the journey successful.

But even though the basic functions and purpose of a camp like this are the same all over the world, no two camps are completely identical in the way they operate. This depends on the make-up, background, and habits of the group which inhabits it. A camp set up by an American expedition, for example, will differ in some ways from one set up by Japanese, which will in turn differ from that of Turks. But despite the differences, their camps share a common objective — each is a place that equips and prepares its members for the climb to the top.

The goal and purpose of all Christian churches should always be the same: to enable people to encounter God, Who has revealed Himself in the person of Jesus Christ.

And so it is with Christian churches. Ideally, each should a base where congregants are prepared and equipped to meet with God. This being said, each denomination and church and will be run somewhat differently depending on the tradition to which it belongs, the cultural and professional background of its members, the personality of the pastor, and a host of other factors.

One should, therefore, not be surprised to find that a Christian church in rural Wyoming will not look exactly like one that meets in downtown Manhattan. Very often, even two churches across a street from one another will differ in some noticeable respects. Nevertheless, despite all their manifest differences, the goal and purpose of all Christian churches should always be the same: to enable people to encounter God, Who has revealed Himself in the person of Jesus Christ. After all, that is why they all call themselves Christian.

All outward differences, therefore, should be unimportant and incidental. Unfortunately, sometimes churches get so involved in their traditions and ways of doing things — the logistics of running camp — that they lose sight of their true purpose. Some churches get hung up on protocols and procedures; some become obsessed with political causes. Robin encountered this situation when she phoned a local church but was told in no uncertain terms that persons of non-liberal persuasion were unwelcome. We can be fairly certain that a church like that does not place a high priority on pointing people to Jesus Christ. There is little spiritual loss in not joining such a place.

If a church becomes overly focused on the logistics or a political agenda, it almost invariably fails to live up to the objective for which it should exist in the first place. It is as if a mountain climber made it to the camp, but once there, he got so involved with incidentals that he never had time to set his eyes upon — much less attempt to ascend — the peak above. How sad would be his homecoming when his friends asked him whether he made it to the top. “No,” he would reply. “It actually did not even occur to me to try. I was too busy with other things.”

As mountain climbing is not about camps, so Christianity is not about churches. Mountain climbing is about scaling peaks. Christianity is about having a personal relationship with Jesus Christ. Helpful though it may be, there is a point where this analogy breaks down. Unlike the mountain climber, the Christian does not need to strain himself to ascend to God. This is, in fact, impossible, because there lies an insurmountable ledge between the camp and the summit.

Left to our own devices, we can never become good enough or holy enough to make it to heaven. God, however, has found a way by sending Jesus to carry us to the top. The only thing we need to do is to let Him. He has done all the work necessary: He lived a blameless life and paid the penalty due to our sins by His atoning death on the cross.

This divine provision is, incidentally, what sets Christianity apart from every other religious system. In other religions, men generally try to make themselves acceptable to God by their own endeavors. They either seek to commend themselves by their good works or they try to appease Him by gifts and sacrifices. But this is bound to be a frustrating quest, as most of those who have trudged along this route will testify. Human nature is too fallen, too erratic, and too weak to satisfy the requirements of divine law.

“For God so loved the world that He gave His one and only son that whoever believes in Him shall not perish but have eternal life,”

In Christianity, on the other hand, there are no prerequisites for salvation. It has been supplied freely by God’s love and mercy. We do not need to strive to make ourselves better or more acceptable. God tells us that to him, good works whose intent is to secure his favor are but “dirty rags.” Knowing we are but dust and ashes, God will receive us just as we are. The only thing asked of us is that we accept his gift offered in the person of Christ. “For God so loved the world that he gave his one and only son that whoever believes in him shall not perish but have eternal life,” we read in John’s gospel.

In Christianity, salvation is profoundly simple — and if we take the time to reflect on it, simply profound. Under Christian dispensation, good works are not actuated by fear or by a desire to enhance one’s standing in God’s sight. Rather, they are a response of a grateful heart overflowing with love toward so great a savior. May Robin of Berkeley and all those who seek be led to the saving knowledge of His son.