Look at the amazingly clear and moral thinking going on in the Catholic Church. Replace the word “Catholic” with the words “Orthodox”, “Anglican”, “Lutheran”, “Baptist”, or just “Christian” and this editorial applies universally to all those who claim to believe in Jesus Christ as the only begotten Son of God, the Messiah, Light of Light, True God of True God, and the Savior of mankind. 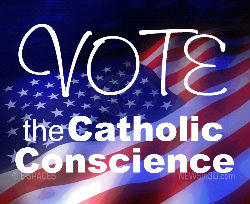 11/2/2010 – Deacon Keith Fournier –
On Tuesday, November 2, 2010, voters in the United States of America will go to polling places in every State in the Union where we have the privilege of exercising our constitutional right to vote. The pundits who filled our television and computer screens with endless predictions on who will win or whether this will be a “wave” election will finally stop talking, at least for a while. The voters will do the talking. Catholics in the United States have an obligation, both as citizens and as Catholics, to vote in a manner consistent with what is true and right, and good.

On April 18, 2005, Joseph Cardinal Ratzinger offered a homily on the eve of the convocation which elected him Pope. Here is an excerpt:

“How many winds of doctrine we have known in recent decades, how many ideological currents, how many ways of thinking. The small boat of thought of many Christians has often been tossed about by these waves – thrown from one extreme to the other: from Marxism to liberalism, even to libertinism; from collectivism to radical individualism; from atheism to a vague religious mysticism; from agnosticism to syncretism, and so forth. Every day new sects are created and what Saint Paul says about human trickery comes true, with cunning which tries to draw those into error (cf Eph 4, 14).

“Having a clear faith, based on the Creed of the Church, is often labeled today as a fundamentalism. Whereas relativism – which is letting oneself be tossed and “swept along by every wind of teaching” – looks like the only attitude which is acceptable in today’s standards. We are moving towards a dictatorship of relativism which does not recognize anything as for certain and which has as its highest goal one’s own ego and one’s own desires.

“However, we have a different goal: the Son of God, true man. He is the measure of true humanism. Being an “Adult” means having a faith which does not follow the waves of today’s fashions or the latest novelties. A faith which is deeply rooted in friendship with Christ is adult and mature. It is this friendship which opens us up to all that is good and gives us the knowledge to judge true from false, and deceit from truth. We must become mature in this adult faith; we must guide the flock of Christ to this faith. And it is this faith – only faith – which creates unity and takes form in love.”

As we exercise our civic duty on November 2, 2010, I share some principles on a Catholic vision of governance. Our identity as Catholics grounds us in a vision of the human person, human flourishing, marriage (and the family and society founded upon it), the Natural Law as the reference point for all positive law, authentic human freedom, and the existence of objective morality. This vision is not simply “religious”. Rather it provides a framework for our work as citizens to serve the common good. It calls us to build what Pope Benedict XVI recently called a “culture of the person”.

Without the Right to Life there are no other rights.

It begins by insisting that the civil government recognize the dignity of every human person from conception until natural death. This is the polestar for our political participation. Those who seek to marginalize us refer to this as being “single issue” politics. In fact, it is not about an “issue” at all. It provides what philosophers and theologians call a “hermeneutic”, a lens, a framework through which every issue must be evaluated. Without the Right to Life there are no other rights. After all, human rights are goods of the person, given to us by the Creator. When there is no person there can be no rights to be received or exercised.

Think about it. Even economic issues begin with the recognition of the dignity of every human person. This election presents some very serious concerns regarding the state of the American economy. The reason we should want to see economic opportunity expand is because we want every person to be able to participate and be rewarded for initiative and hard work in order to flourish and be truly free. The reason we should be concerned about the poor is because we recognize their human dignity. The reason we should be worried about the expansion of the federal government is because collectivism, of any kind, is a threat to human dignity and human freedom and flourishing.

The reason we should be worried about the expansion of the federal government is because collectivism, of any kind, is a threat to human dignity and human freedom and flourishing.

The American founders understood this kind of vision because they stood in the light of the Christian influence on western civilization. They insisted that human rights are endowed by a Creator, not given by a civil government. They memorialized the proper role of government to secure these rights in the Birth Certificate of the Nation, the Declaration of Independence:

“We hold these truths to be self-evident, that all men are created equal, that they are endowed by their Creator with certain unalienable Rights, that among these are Life, Liberty and the pursuit of Happiness. – …

That to secure these rights, Governments are instituted among Men, deriving their just powers from the consent of the governed.”

Our insistence on the recognition of the Right to Life is not based solely upon our belief in Revelation, though it is found at the heart of both Sacred Scripture and the living Tradition of the Church. It is written on every human heart through the Natural law and it is knowable by reason. We need to explain this if we hope to overcome the effort to marginalize our position as being based on “religious convictions” – a shorthand way of saying that it should be confined to the sphere of private beliefs. This is the bad fruit of the Dictatorship of Relativism. When there are no truths, there can be no real rights.

One of those truths is that marriage is a lifelong union between one man and one woman open to life, constituted for the good of the spouses, the good of children and the common good of society. Marriage is not our idea. It is revealed by the Natural Law and has been recognized as such cross culturally. Marriage and the family founded upon it is the first church, the first school, the first economy, the first hospital, the first government, the first society and the first mediating institution of any just social order. We must learn to discuss the goods of marriage and its proper ends in a language which communicates to an age deluded by ideologies of self centeredness.

Freedom itself needs to be set free”. We suffer from the aftermath of a counterfeit notion of freedom as a perceived “right” to do whatever one pleases.

Then, there is a true vision of human freedom. In the words of the late John Paul II, “Freedom itself needs to be set free”. We suffer from the aftermath of a counterfeit notion of freedom as a perceived “right” to do whatever one pleases. That is, again in the words of John Paul, “a counterfeit notion of freedom”. We must explain the truth that freedom brings with it an obligation to choose in accordance with what is right and true and good. Further, that only in choosing the good can men or women – or the societies which they form – ever hope to be good and be well.

Then, there is the obligation we have to one another. Solidarity is not an option; we simply are our brother’s (and sister’s) keeper. We must reject the atomist individualism, whether it comes from the left or the right. The Catholic vision of the social order affirms that we were created to love and to live our lives with and for one another. Further, that we have an obligation to the poor. While we can disagree on how to best implement this obligation of social solidarity, we must begin by acknowledging that it IS an obligation. Catholics should reject a false libertarianism which asserts the isolated individual as the measure of freedom.

It is time to insist that there is an objective moral code which can be known through the exercise of reason.

It is time to insist that there is an objective moral code which can be known through the exercise of reason. Further that it must order our life together if we want to be a truly civilized people. This view of the existence of such an objective moral code is the foundation of the American experiment in self governance. Only a recovery of the Western vision of a free society, derived from the treasury of the Church, can stem the slide toward materialism, nihilism and the self idolatry which is rotting our social order. We need to contend for the hearts and minds of our fellow citizens by explaining that we are, by nature and grace, made for the other and that only in the giving away of ourselves to the other will we ever find the human fulfillment and flourishing which we all long for.

Finally, we should reject anti-government rhetoric which sees governance in a Hobbesian view as a restriction on “freedom”. God governs the universe. We are called to participate in His governance. The real question that should be asked is how we govern and who does the governing. We need a vision of “good governance”. Good governance must be moral, recognizing and adhering to the good. It must also be “good” in the sense of being efficient and not violating the principle of subsidiarity. Subsidiarity is a social ordering principle which recognizes that government is good when it is closest to those being governed. Government begins in the family, the first government, and proceeds out to the local community and the mediating institutions of society.

It is time for US Catholics to Vote and then get on with the work of building a truly free and good society.